Touhou Eiyashou ~ Imperishable Night is the eighth official game of the Touhou Project scrolling shooter series by Team Shanghai Alice. It is the third Touhou game to be released specifically for the Windows operating system. It was first released in the 66th Comiket on August 15, 2004.

Imperishable Night plays like a fairly typical vertically-scrolling danmaku shooting game, in which the player's character is always facing towards the top of the screen, shooting at anything that moves, avoiding and weaving between enemy bullets, and confronting difficult bosses at the end of a stage.

Quite a few details are unique to this game, including Last Spells - for an enemy, a Last Spell is a bonus Spell Card which the player can tackle without fear of losing lives/bombs. On the player side, Last Spells are secondary "bomb" Spell Cards, which last longer/do much more damage at the expense of two bomb stocks. There is a gauge which tracks how human/youkai (normal/focused) the player is, as well as a new "Time" system, which affects gameplay. 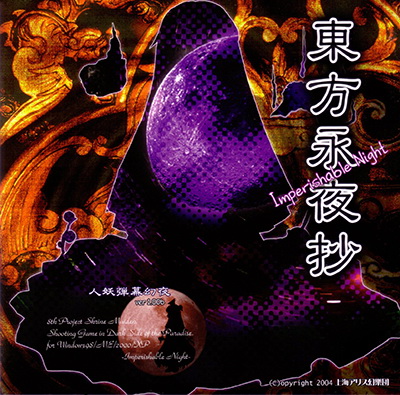