Fable II takes place 500 years after the events of Fable. The game starts with the player choosing a male or female character called Sparrow, who is only a child in the beginning. After Sparrow's sister is killed by Lord Lucien, the player's objective becomes taking revenge on him.

Fable II is an action RPG with sandbox-style gameplay. Two players can play the game via Xbox Live in co-operative mode. The hero character is controlled in a third-person view. Players can attack with short-range and long-range weapons as well as magic spells. After enemies are killed, they leave behind experience spheres in different colours. The colours depend on the way the player killed them. After the spheres are gathered and a certain amount of one colour has been gathered, the player can upgrade their heroes stats and magic spells. Sparrow is accompanied by a dog who detects hidden treasures and helps the player out in fights by killing enemies lying on the ground.

The game puts a great emphasis on socializing with NPC characters. Player have a multitude of different gestures they can use to influence NPCs, for example by scaring them or making them laugh. It is also possible to marry NPCs and have children.

Another important aspect is the economy in Fable II. Depending on how well the player does, prices for equipment, books, potions, food and furniture for example can vary. To earn money, Sparrow can take on different jobs like forging swords at a blacksmith or chopping wood in small mini-games. Players also have the option of buying each and every building they see in the game, either renting them (and reaping the profits) or living in them with their families. 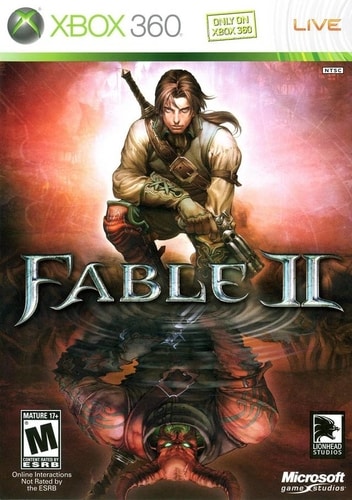