Montezuma's Return is, in contrast to to the PC game of the same name, not a completely new adventure but closely based on the design of the original Montezuma's Revenge. While some of the 150 levels are directly ported over, the majority are new. Another major difference is that the camera is closer to the action, i.e. the levels scroll instead of fitting into a single screen.

The premise is the same as always: The player takes the role of an adventurer who explores a pyramid in order to steal all its treasures. In each level, the goal is to grab all treasures and reach the exit without dying, which happens instantly when touching one of the numerous enemies or falling from too large a height. Since the player has no attack option besides rarely found daggers, the majority of the game is spent dodging by using ladders or jumping. Other obstacles besides enemies are closed doors which have to be opened with keys, conveyor belts, teleporters, disappearing platforms or the time limit. Power ups grant temporary advantages such as the ability to walk through enemies or kill them by touch. 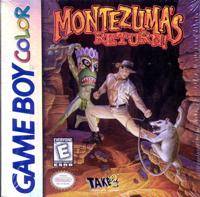