With a clear James Bond influence, Sly Spy must stop terrorists destroying parts of the city in this collection of sub-games. Roughly half of these (starting with level 2, and alternating from there on) are side-scrolling Green Beret-influenced offerings, not entirely dissimilar to a great many Ocean movie licenses. There are bad guys to shoot and bullets to avoid, with boxes to climb up on and strategic positions to shoot from behind cover.

The first level involves skydiving down the screen and shooting at the agents as they themselves fall - complete this and you'll safely parachute to the ground. There's a motorbike chase, in which you must shoot out and dodge agents. Two underwater levels follow, in which more enemies and some sharks must be shot. Before reaching the final multiple-enemy showdown in a missile factory full of the baddies from the game. 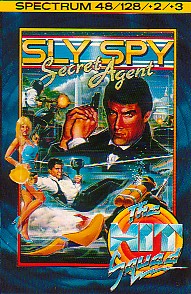