God of War: Ascension is the seventh installment of the God of War series and serves as a prequel to the games. The player follows Kratos, the protagonist of the other games. When Kratos is tricked by his master, Ares, the god of war, into killing his own family, Kratos abandons Ares and breaks the blood oath between Ares and Kratos. Subsequently, Kratos is imprisoned and must fight his way out of his bond between him and Ares.

The game uses essentially the same hack-and-slash combat system from the previous games. Kratos is still equipped with the Blades of Chaos, but now is able to pick up a few different weapons through the new weapon mechanic called the World Weapon system. Kratos can now learn up to four magical disciplines, which include the Fires of Ares, Ice of Poseidon, Lightning of Zeus, and Soul of Hades. Each discipline provides a unique ability to the character as well as imbue his weapon with the magic.

The game introduces online multiplayer for the first time in the series. Before each multiplayer battle, players choose to align with one of four gods: Ares, Hades, Zeus, and Poseidon. Each god gives a unique set of abilities to the character. Players gain experience and level up there warrior, unlocking magical abilities, armor, weapons, relics, among other treasures available. Four distinct multiplayer modes come equipped with the game: Team Favor of the Gods, Match of Champions, Trial of the Gods, and Capture the Flag. 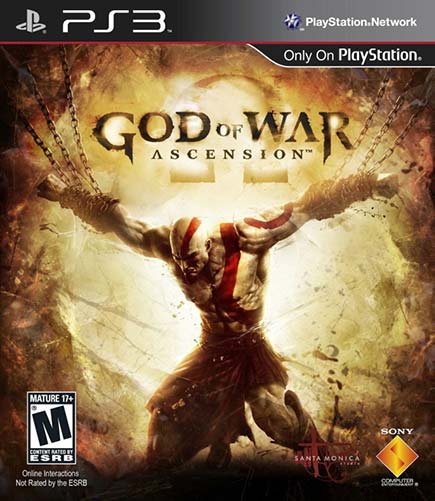