Prince of Persia: Warrior Within

Prince of Persia: Warrior Within is the direct sequel to Prince of Persia: The Sands of Time. Seven years later, the Prince is hunted by a monster known as Dahaka. He finds out that anyone who manipulates the Sands of Time is destined to die shortly afterwards; but the Prince has escaped his fate, and that's the reason for Dahaka's rage. Now the Prince must travel to the mysterious Island of Time, where he hopes to find the Empress of Time and, through time manipulation, somehow prevent her from creating the Sands in the first place...

The game comes with a new, darker look for the Prince and his surroundings. The fights are more brutal and take a larger part in the game, as the Prince now has enhanced fighting moves including new attack moves via walls and poles.

Even though the fights make up a large part of the game, the puzzle sections are still present and more complicated than before. A new move in the puzzle sections of the game is the curtain slide, which allows you to slide down to the ground slowly. There are still plenty of options for time manipulation and the storyline also lets you travel back and forth in time, visiting the same locations in an alternate time period. 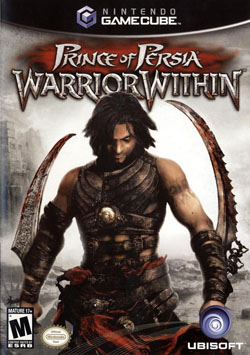