After 14 years, Donkey Kong Country has returned with an all-new banana-hoarding adventure only on Wii!! Donkey Kong makes his triumphant return by going back to his running and jumping roots in an all-new barrel-blasting, rail-riding and ground-pounding adventure! The Donkey Kong Country series comes to life on Wii in lushly rendered environments that will have you running left to right, hunting high and low and blasting front to back to scour eight worlds in search of hidden coins, puzzle pieces, and Donkey Kong's stolen banana hoard. Diddy Kong joins the adventure with his own moves, special combo abilities and a series-first two-player cooperative mode. When playing alone, Donkey Kong carries Diddy Kong on his back, giving a jet powered boost to his jumps. In co-op play a second-player can also join on any level, controlling Diddy Kong independently or riding on DK's back to power through stages together, allowing players of all ages and skill levels to experience the fun of Donkey Kong Country Returns. The Wii Remote and Nunchuk controllers put the brute force of a great ape in the palms of your hands. Shake the Wii Remote and Nunchuk controller s to slap the ground, stunning enemies, demolishing objects and activating explosive switches. A quick shake while running sends Donkey Kong power rolling through lines of enemies. Add in skillful jumps, grabbing and throwing objects and clinging to vines on walls and ceilings, and you'll be racing through stages like a true king of the jungle. 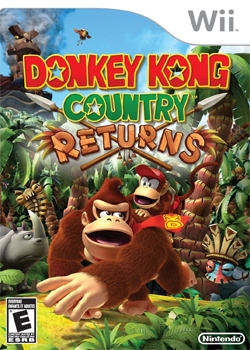