Go behind the seams with Kirby in his latest adventure!

Kirby's first console platform game since the Nintendo 64 days introduces an amazing new look based on animated yarn and a world of cloth and textiles. The creative approach is woven directly into the game play and allows the ever-morphing Kirby to take on a variety of new forms. A simultaneous two player mode will have players of all skill levels enjoying this one-of-a-kind experience.

● The look of the world is stunning, but it's also interactive. Pulling on stray threads might reveal hidden areas. When Kirby literally goes behind the scenes, the virtual fabric warps and bends to show his location. ● Thanks to his versatile yarn composition, Kirby can take on a variety of forms both in his common actions and when he transforms into powerful vehicles. When Kirby dashes, he zips around as a car. In water, he turns into a submarine. At times he can even transform into a massive robotic tank, a UFO and other vehicles. ● Two players can play through the entire game together. ● Beads and collectible items are scattered throughout the environments for players to find. 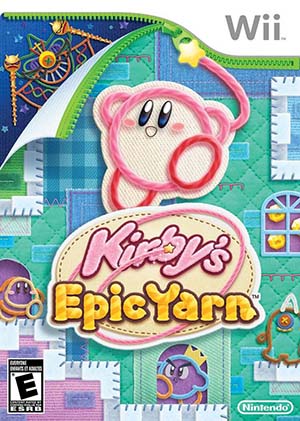