At a summer camp for up-and-coming psychics, a young boy with an unusually high level of psychic ability inexplicably shows up. The boy, named Raz, is allowed to stay at the camp until his father comes to pick him up, but his arrival coincides with very strange circumstances. Soon, evidence that someone is psychically tampering with the campers' minds reveals itself, and Raz is the only one who can stop it. Raz must project himself into the psyches of several different people in order to figure out what is going on and who is behind the recent occurrences.

Psychonauts is a 3D platform game with a rather unorthodox style. The characters' inner worlds are the game's levels. Each world reflects the personality of the person whose psyche it represents, often resulting in unique, surreal creations, and influencing the gameplay style. For example, the psyche of a giant lungfish is presented as a large city populated by fish people, in which Raz himself becomes a giant monster who can destroy entire buildings; the psyche of a mental patient is a huge board game, where Raz has to command armies in order to defeat Napoleon, etc.

There are also many gameplay elements and tasks which are common for all the levels. These include Raz fighting the (not very numerous) regular enemies, defeating level bosses, collecting currency, "figments of imagination" needed to upgrade his powers, and bonus items such as complete sets of the character's memories and others. Many of the game's puzzles require the usage of psychic powers, which Raz obtains in a more or less strict order. These powers range from combat abilities such as Psy Shield to Telekinesis (moving objects without touching them) and Clairvoyance (reading other people's minds).

The camp itself serves as the game's "hub", in which the player can explore, interact with characters, search for secret areas and items, and so on. 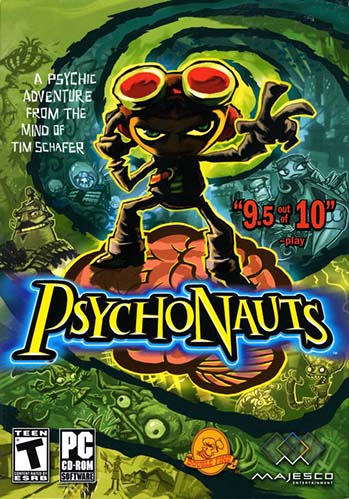