Sam Fisher is a broken man since the events in Tom Clancy's Splinter Cell: Double Agent. He doesn't care about Third Echelon or even the American country anymore. The only driving force in his life left is his thirst for revenge. Revenge for the death of his daughter. One day a lead on the murderer takes him to Malta but before he can act, an old friend calls: Anna Grímsdóttirm his old liaison officer. She unveils to Fisher that his daughter Sarah is still alive but of course it's not without a hidden agenda. So in order for Fisher to see his daughter again, he has to save America once again - but is Anna really telling the truth?

The player once again looks Sam Fisher over the shoulder while he makes his way through the levels in order to fulfill his objectives ranging from killing specific targets to blowing stuff up. As opposed to the previous installments of the series however, Sam prefers a more direct approach. While stealth and hiding in cover are still important parts of the gameplay, Sam doesn't care all that much about the lives of his enemies anymore and as such has thrown out most of his gadgets. So instead of avoiding the enemy, the player will mostly concentrate on how he can most efficiently take out the targets.

To help him with that, the player has access to a vast array of weaponry both with and without sound suppression including various types of grenades like frags, remote mines or a sticky camera which allows Sam once again to scout an area from afar, to entice enemies away or simply explode in their face. All weapons can be upgraded three times, increasing their power, range and accuracy using the points earned by completing objectives and fulfilling the so-called P.E.C. challenges. The P.E.C. challenges include stuff like killing five enemies with the "Death from Above"-move or with a silent headshot and such.

Each weapon also features the attribute "Marks". The player can mark as many enemies as the weapons allows with a grey arrow, making them visible even behind closed doors. But more importantly the marks are used for the new "Mark & Execute"-feature. Once Sam Fisher has performed a hand-to-hand takedown, the arrow above marked enemies in range of his current weapon turn red. The player then presses the execute button and Sam will kill all marked enemies in range in a slow-motion move, basically making it a instant kill.

If Sam is spotted by an enemy but manages to duck away, a ghost of Sam remains on his last position. With this, the place is marked where the enemy suspects Sam is hiding and while everyone's attention is on that spot, the player has time to plan his flanking move accordingly. In addition loud noises will once again distract the enemy and turn his back on Fisher. 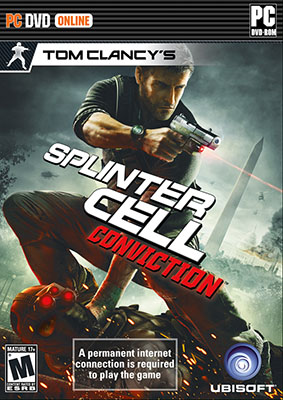