The evil commander Borf has kidnapped Ace's girlfriend, the beautiful Kimberly, and is plotting to enslave the Earth using his dreaded "Infanto Ray", a weapon that changes everyone it blasts into a helpless baby. Armed with only a laser gun, Ace must find and destroy the Infanto Ray, rescue Kimberly and save the Earth. All in a day's work for a superhero, right?

While following the same story as the Laserdisc conversions, the SNES version of Space Ace lacks the long video sequences of the original, and also features different gameplay. Instead of only pushing the right button at the right moment, the player has complete control over Dexter. Most of the time, he will be busy jumping over chasms and dodging alien attacks, but occasionally, an 'energize'-symbol will appear which, by pressing the correct button in time, will temporarily transform Dexter into his stronger alter ego and enable him to shoot at his enemies. 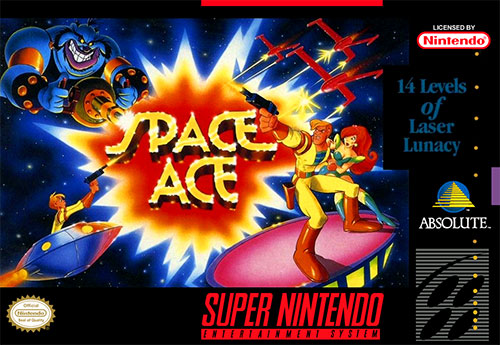