This adventure for the Wii console marks the first time a second 3-D Mario game has arrived in the same console generation. In the game, Mario rides his trusty dinosaur companion, Yoshi, to new stars and the fantastic worlds found there. This 3-D platforming adventure provides longtime video game fans with a fresh round of out-of-this-world challenges in the style introduced in the critically acclaimed original.

Like its predecessor, Super Mario Galaxy 2 is an action platformer set in space. Platforming takes place between worlds, known as galaxies. Mario can move between smaller examples of these by jumping. He can also embark on longer jaunts via a small steerable planet in the shape of Mario's head, but as a new twist he can also move into and through planets as well using the new drill mechanism. This allows for both a new direction in action as well as an opening to problem-solving and coin collection.

Players can expect the return of a variety of powerups from the original game including Bee and Boo Mushrooms, but also many new varieties including the Rock Mushroom that temporarily turns Mario into a rock that can smash through barriers. Another key change to gameplay is the ability for Mario to join with his pal Yoshi. Once Mario hatches Yoshi from his egg he can ride him through a variety of scenarios. Yoshi's particular reaction to specific powerups makes for fun with gravity. For example, when Yoshi eats a "Dash Pepper" he is able to move at hyper speed allowing the pair to literally run up the side of walls. Also, after eating a Blimp Fruit power-up Yoshi swells up and floats like a blimp, taking Mario with him to areas of the game otherwise unreachable. 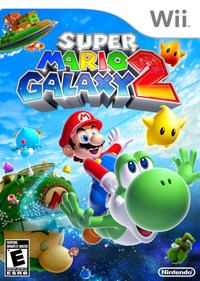