Reaching high towards the heavens, the Tower of Doom stands, beckoning brave adventures to confront the bizarre creatures and brave the deadly traps it contains in hopes of collecting the bountiful treasures and magical items found within its corridors.

Tower of Doom is a single-player, Dungeons & Dragons-inspired title created exclusively for the Intellivision. Choose from 10 different character classes, each with its own strengths. 7 different quests are available for play, with the harder quests featuring randomized maps and magic item effects. After choosing the quest to embark on, players will then control their character using a top-down view of the section of the dungeon they are in, the corridors and rooms being drawn on-screen as they explore them. Also to the player's disposal is a display of the character's inventory which can be utilized at any time, and an on-screen map of the entire dungeon. Encountering a creature will initiate a battle screen at which time players can fight the creature or attempt to bribe it with items they have discovered. Magic items and traps can also be found in the dungeon, each having unique effects on the player. 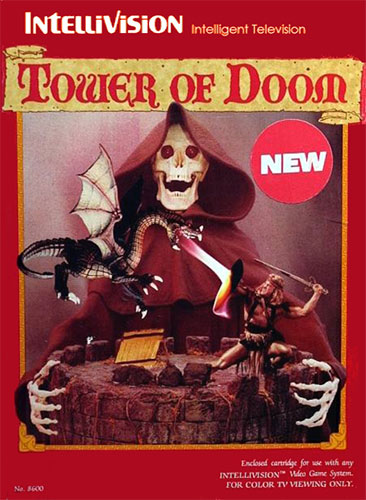