Godzilla: The Series - Monster Wars is the second game based on the animated TV series Godzilla: The Series. Godzilla is the good guy and has to save the world from other monsters, but unfortunately the military wants him dead. So he walks through the ten side-scrolling levels with different background graphics and kills all opposition. Godzilla has six attacks, e.g. a fire breath or a tail whip, which the player has to trigger. Because of his size, there are no variations in movement. Being hit causes Godzilla's life energy to go down.

This is mostly the same game as the predecessor Godzilla: The Series. The only differences are that Godzilla now has to be moved manually to the right, the head attack has a crosshair and the life energy does not automatically refill anymore. 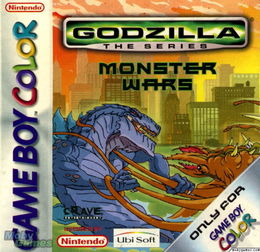