Evil Genius is a single player real-time strategy and simulation video game developed by Elixir Studios and published by Sierra Entertainment, released on 28 September 2004. The game is inspired by the spy thriller genre (notably the James Bond film series). Similarly to Dungeon Keeper, the game turns the traditional plotline on its head, with the player acting as the villain, evading the comically stereotyped forces of justice. Gameplay revolves around the player building an island fortress and achieving clichéd world domination.

The intellectual property rights of the game are since March 2, 2006 confirmed to be owned by Rebellion Developments. The game is now available for purchase on GameTap, Steam, Good Old Games, and OnLive. 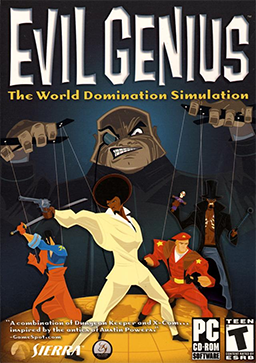