This game takes place in a time when knights were bold and castle crumbling was one of the most popular sports.

In this Artillery clone, two players must try to destroy each other's castle with their catapults. By pressing any direction in the joystick, the player launches a boulder toward the opponent. The longer the stick is held, the farther the boulder goes.

Besides hitting the castles, boulders can also hit the enemy catapult or the soldier operating it. In any of these cases, the catapult and soldier will go offscreen to receive the necessary repairs or first aid. Miscalculated shots can also hit the player's own castle, giving points to the opponent. The winner is the one with more points at the end of ten battles.

Players score three points for each hit on a castle, seven points for hitting an enemy soldier and ten points for hitting an enemy catapult. At the end of each battle, the points scored by the winner are multiplied by the number of the battle (one to ten). The loser gets no points. There are three variations to this game, according to the catapult tension. The higher the number of the variation, the faster the catapult shoots. 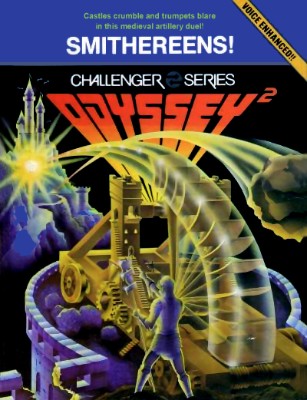