Turtles, also known as Turpin, puts you into the role of the maternalistic turtle who tries to save the kidturtles from a bunch of bad bugs (or, in some versions, bad cars). It takes place in a Pacman-esque labyrinth, with turtle boxes in the centre and corners of the screen. Run into a box to release the turtle kid inside. Opening a box makes a little house show up, and you must go with the kidturtle to the house before you can release the next one. All the while, you must avoid the bugs/cars running around the maze. If they get too close, you can release a mine which will stun them temporarily. When you run out of mines, you must resupply by passing over a star in the centre of the screen. Beware, though, because the simpleminded bugs become smarter as time passes; this is symbolised by their changing colours. On later levels, those sneaky beetles can also come out of the boxes supposed to hold kidturtles. Watch out!

Each level is a floor in a house, and between levels you can see the turtle climbing to the next floor until it reaches the top. However, in the Philips versions, the kidturtles are replaced by people whom the turtle must save from ships, while the bugs are turned into turtle-eating fish. 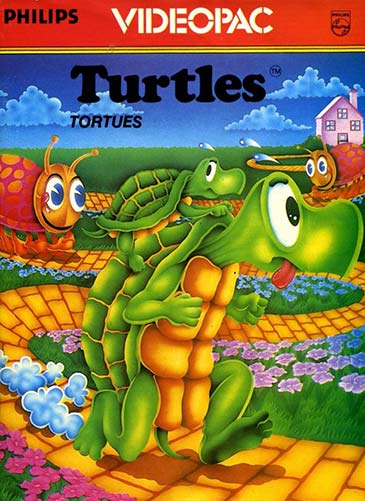