Street Fighter EX is a 3D fighting game originally released as an arcade game for the Sony ZN hardware in 1996, it is a spin-off of the Street Fighter series co-produced by Capcom with Arika and it is the first game in the EX series. Although non-canon to the mainline installments, it was the first Street Fighter game to have 3D graphics.

The Street Fighter EX fighting system uses fighting systems of the Street Fighter II and Street Fighter Alpha series. In many ways, EX still plays like a 2D fighting game, but the linear plane in which characters fight often changes along a 3D battleground. The game uses special moves and super combos familiar or similar to the previous games in the series. Like in Alpha and Darkstalkers, the super combo gauge, used to do Super Combos, was divided into three levels. The game introduces various new features to enhance the player's combat choices.

Aside from throwing the opponent or wearing away their life by using special moves to drain it, another way to fight blocking is the "Guard Break". The Guard Break is a move that, if it connects with the blocking opponent, breaks the block and makes the opponent dizzy. 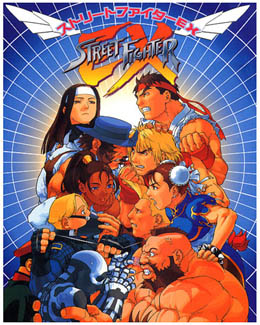