Street Fighter III: New Generation is a 2D fighting game, and opens the third (fourth, counting Alpha) Street Fighter's tournament. Only Ryu and Ken come back. The rest of the characters are new.

The gameplay is similar to other games in the series, but there are several new abilities and features introduced. Now, characters can dash, retreat, do leap attacks, parry, and use "Super Arts". The rest is the same - the fight is a duel with mostly fists, kicks, and special powers, lasting until the life bar of a participant is depleted, or the timer reaches zero. 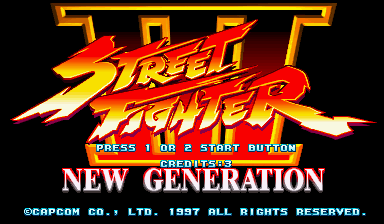