Dust awakens one day in a forest and meets his two helpful companions for the first time: Ahran, a speaking sword and Ahran's guardian Fidget, who is reminiscent of a flying-fox-fairy. Like all good video game protagonists, Dust has amnesia and has to travel through the world and find out what is going on and how his past plays into all. The story is told in animated cut-scenes and all persons are based on animals, e.g. Dust reminds of a fox.

Dust: An Elysian Tail is a Metroidvania game; it is set in interconnected, side-scrolling areas which can be freely explored. During the course of the game, the protagonist learns new abilities which allow him to reach new parts of the world. The focus is less on platforming, but on fighting the numerous enemies with Ahran and various special attacks. Fidget is used for ranged special attacks. It is important to have uninterrupted hit series because they bring big experience boost. When reaching a certain amount, Dust levels up and can improve either Fidget or his life energy, defense and attack. However, character development is not completely free because the highest stat is only allowed to be four points higher than the lowest.

Upgrades like new clothes have to be crafted with materials and plans which are found in the game world or slain enemies. After finding them once, materials can also be bought from merchants. Other side-activities are rescuing guest characters from other games (by finding both the key and cage) for a life energy boost, solving side-quests (usually finding items/characters or killing monsters) and an area where Dust has to kill all enemies in a limited amount of time. 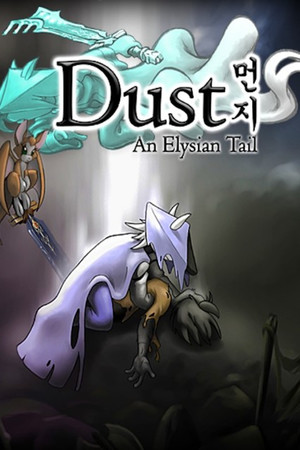