Top Gun: Firestorm takes the player to the skies again in twelve missions where numerous aerial and ground based enemies need to be fought to arhieve victory.

The story is very loosely based on the movie of the same name. The player guides the well known pilot Maverick through a series of realistic training missions to receive graduation from the Top Gun school. The story is advanced in several stills throughout the game.

The player will fly a F-14 Tomcat on an isometric map. He has to complete several objectives in each mission. To achieve those he has four different weapons at his disposal (machine gun, bombs, rockets and missiles). 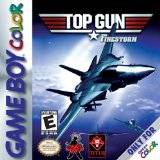