Kang Fu is a standard, side-scrolling platformer. The player takes control over Klont, a kangaroo, who has travel to numerous levels while saving baby kangaroos and killing a boss at the end. Of course there are many enemies which decrease Klont's life bar when they manage to hit him. He can dispose of them by jumping on their heads or by using weapons which can be found during the levels: boomerangs, eggs, machine gun, bombs and boxing gloves. The player can circle through all collected weapons and most of them disappear after finishing a level.

Other collectibles are the already mentioned babies and diamonds which reward extra lives and bombs when enough of them were gathered. Sometimes a hidden key has to be found in order to open a closed door. There are two easier difficulty levels which only give access to the first few levels. The graphics style is a mix between drawn graphics and digitized images. 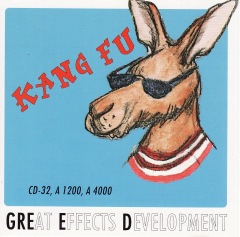 This game also exists on:
Amiga