Lights! Camera! Action! It's time to meet Oscar, the newest legend of the silver screen, ready to take Tinseltown by storm... once he's used his star-power to escape the theater he's trapped in, that is!

In this game the main protagonist is Oscar - a cute, squirrel-like creature. The player controls him through 7 Levels in a Hollywood-style (Science Fiction, Western, Horror, Cartoons, Dino, Detective and Gameshow) each divided onto three scenes. The main goal is to jump and run through the level in order to find... Oscars (yes – the Academy Awards' statues!). If enough Oscars are collected, the level is completed. The player can explore levels in any order he/she wants - they are accessible through a tower of doors that are opened when tasks are completed. During his trip through the stages, the player encounters many enemies that can be avoided by jumping over or killed by jumping on them. The latter, as well as some collectibles, reward the player with power-ups like invulnerability, superjump or Yo-yo gadget that can break down walls. 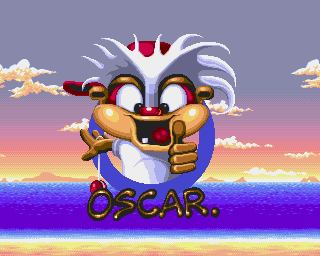