Turok 2: Seeds of Evil is a 2D side-scrolling beat'em up (quite similar to Bad Dudes - only several levels have limited 2.5D gameplay). The game is very different from Turok 2: Seeds of Evil for PC and N64, which is a first-person shooter and has a different story. The player controls main hero Joshua Fireseed, who became Turok and fights against the Amaranthine Accordance, a legion of dinosoids. The gameplay is quite simple - the player goes left, jumps over holes and spikes, climbs up, and of course kills enemies, like humans, various dinosaurs, giant bees etc. The hero uses several weapons which must be found first. Certain levels have a different design compared to the rest of the game, such as riding on a dinosaur, for example. 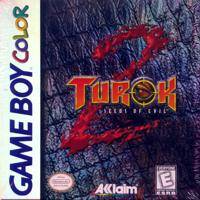