Never the same game twice. That's quite a promise. But it's the reason this classic continues to be the most popular game on college mainframe computers. ROGUE is so full of unpredictable monsters, ever-changing magic and hidden dangers that it's never the same game twice. Enter the Dungeons of Doom. See for yourself. Try to find your way to the Amulet of Yendor, but don't bother mapping the rooms. They'll be diferent next time. As a matter of fact, the Dungeons change every time you enter. So do the monsters. Remember that troll you fought on level 18? He might be an urvile next time. Or worse yet, a dragon. There's only one thing you can count on... your enchanted sword. ROGUE. You could spend hundreds of hours playing it... and you still wouldn't uncover all its secrets.

● Explore 26 levels before you reach the Amulet of Yendor. ● 26 types of unpredictable monsters. ● Fast-play option included. ● Records of high scores and rankings in the Hall of Fame. ● Save game feature included. 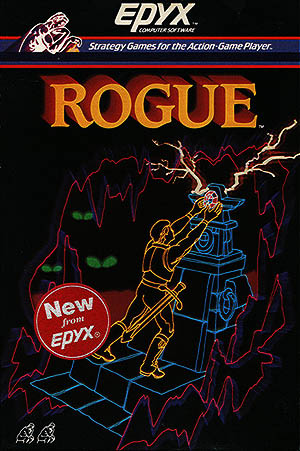