Popeye has been kidnapped by the evil aliens Kraggs and taken to a desolate asteroid on the edge of the Galaxy. To find out which planets are weak, wrestling matches will be fought. The losers' planets will be conquered. Popeye has to wrestle five other aliens to keep Earth safe.

To help Popeye to win is Olive Oyl and Wimpy who throw spinach and hamburgers into the ring to keep up Popeye's energy. Collect enough spinach and Popeye can use his special move Turbo Typhoon Technique. The alien opponents will collect the hamburgers as well. Brutus is also at the fight and will throw in bombs to hinder Popeye. Popeye can steer his opponent onto the bomb as well.

Popeye 3 is a 1 or 2 player wrestling game shown from the side with the screen showing the whole of the ring. The joystick moves Popeye about the ring and with the fire button can perform various moves. When in a grapple the joystick needs to be waggled fast to throw the opponent onto the floor. Once the opponent is on the floor then it can be pinned. 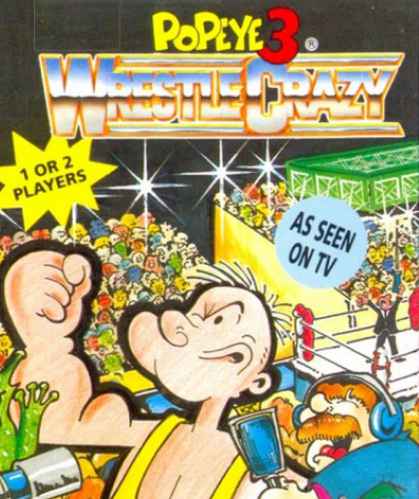