Mega Man 9 is an action-platform game in which the player controls the titular character and must complete a number of 2D side-scrolling stages. The start of the game presents a select screen of eight stages from which the player can choose to complete in any order desired. Within each stage, the player advances by running, jumping, avoiding traps, shooting enemies and mini-bosses, and ultimately battling the Robot Master boss at the end. Mega Man begins with a "Mega Buster" arm-cannon weapon, but as each boss is defeated, a unique weapon is added to his arsenal. Because each Robot Master is weak to a specific weapon, the player may strategize the order which the stages are cleared. The player also begins the game with the option to call on Mega Man's dog Rush, who can transform into a "Coil" springboard for jumping higher or a "Jet" for transversing long distances in the air. Mega Man health, his special weapons, and his Rush options are all limited by energy gauges that can be refilled by picking up items found throughout each level. Special screws can also be picked up and used to buy items at Auto's shop between stages. These items include extra lives, tanks that refill energy, and one-time-use items that call on Mega Man's companions Eddie and Beat for help. 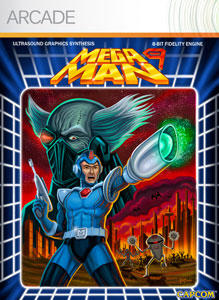