Mega Man 10 is a video game developed by Capcom and Inti Creates. It is the tenth main entry of the original Mega Man series. The game was released as a downloadable title for the console gaming services WiiWare, PlayStation Network (PSN), and Xbox Live Arcade (XBLA) during March 2010.

Mega Man 10 is an action-platformer like the games that came before it. The player is initially tasked with completing an octet of stages from a select screen. Each of these 2D side-scrolling stages contains obstacles and traps to overcome and enemies to shoot. Various power-ups such as health and weapon ammunition can also be found or picked up from defeated enemies. The end of the stage presents a boss battle with a Robot Master. Victory over the boss will earn the player its special weapon, which can be used throughout the remainder of the game. An in-game shop allows the player to use screws picked up in the stages to buy extra lives, energy tanks for refilling health and weapon power, and other useful items. At the start of Mega Man 10, the player is able to choose and play through the game as either Mega Man or Proto Man. Though the two characters play similarly, there are some fundamental differences. For example, unlike Mega Man, Proto Man is able to charge up his arm cannon for more powerful attacks, slide along the ground, and block small enemy shots with his shield. However, Proto Man takes twice the damage that Mega Man does, is knocked back twice as far when hit, and can only have two shots onscreen at a time versus Mega Man's three. Both characters have optional support abilities. Mega Man can call on his dog Rush to reach high platforms or traverse long distances in the air. Proto Man has the same capabilities in two generic support items. 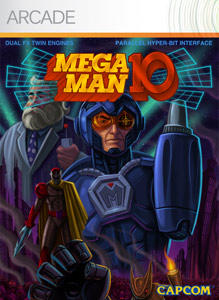