This is the second game in Digimon Adventure series, a kind of an add-on to Anode Tamer. The game is based on the popular manga Digimon. The hero, a boy named Ryou, has to travel to digital world in order to free his friends from the clutches of the evil digital monster Milenniamon.

The story of this game is identical to that of "Anode Tamer", and gameplay mechanics are exactly the same: you descend into dungeons to fight monsters in turn-based style, capture the monsters after the battles and then send them to fight new ones. The difference between the two games are the monsters themselves: "Cathode Tamers" features a brand new set of monsters, and since the beginning of the game you encounter different foes. The full collection of monsters can be achieved only if you complete both games. 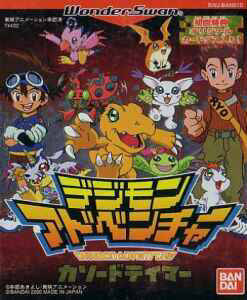