Moon Patrol is a side-scrolling game where the player must drive a moon buggy from one station on the Moon to another, all while avoiding crashing or getting destroyed by alien ships. The vehicle is constantly moving right and the player can speed up or slow down, jump, and shoot (simultaneously firing upwards and forwards.) There are 25 checkpoints along the way, each symbolized with a letter from A to Z, and serving as a respawn point. Every five checkpoints mark a separate "stage" within the entire course; reaching the end of a stage under the par time grants a large score bonus.

Dangers on the Moon include rocks (small and big ones) which can be shot to pieces or jumped over, pits which must be jumped, and UFO's which fire at the player or bombard the ground (creating pits). Later the player also comes upon stationary tanks which fire missiles (that can be destroyed with the player's own shots), landmines, carnivorous plants that pop up out of pits, and rocket cars which stalk the buggy from behind before rushing forward in an attempt to ram it down.

After completing the first course (the "Beginner Course") the player can try his skill on the harder Champion Course. 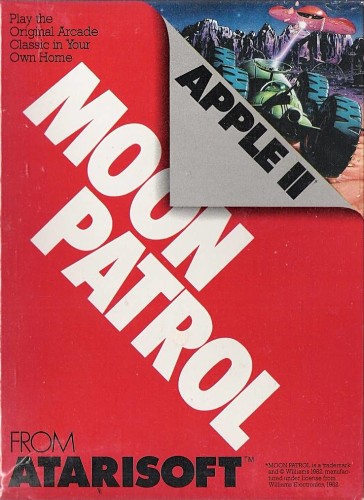