In Monty On the Run the intrepid coal thief Monty Mole fled to the rocky island of Gibraltar. However, the Intermole agency is on to him, and his only hope of escape is to trek across Europe, collecting enough cash to buy the Greek island of Montos and live there in luxury.

This is Monty's fourth game, and the structure is similar to the previous three. It's platform and ladders based, with 80 screens each representing some area of Europe - the Eiffel Tower and the Leaning Tower of Pisa are among the identifiable landmarks.

There are different ways of travelling through the levels - some bouncy platforms coupled with a new super-leap move allow for big progress to be made, while Monty can also suspend from the ceilings and dodge his way across. Monty can now fall without being hurt, although landing on water can cause multiple lives to be lost in quick succession. Collecting wine bottles makes Monty drunk and he will stumble around randomly until he recovers by becoming sober again.

There are many items to collect - the most important are Eurocheques for money and airplane tickets. Once on a plane you must fight off the encroaching Intermole planes for extra points. 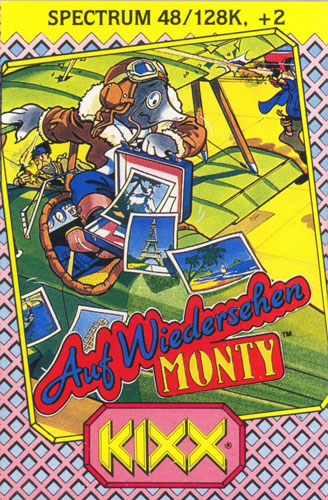