The Dirty Pair are a duo of crime-solving field agents (Kei is the redhead, Yuri is the brunette) for an intergalactic trouble-solving service in a distant future where mankind has colonized thousands of star systems. Though they prefer to be called the Lovely Angels, the Dirty Pair are so named by others for the massive amount of collateral damage that tend to follow each of their missions (though it is rarely their fault).

Though known for the various novels, mangas and anime OVAs that were produced for the license, Dirty Pair: Project Eden was most likely based on the feature length movie that came out five months previously to this game's release. The movie was known in Japan simply as "Dirty Pair: The Movie", though it would later be subtitled "Project Eden" for its 1994 US release.

The actual game is a horizontally-scrolling "run and gun" platformer that occasionally changes its focus from a frantic shoot-em-up (a certain item calls in the other half of the duo on a flying armed motorbike) to a more deliberate maze-hunting game. 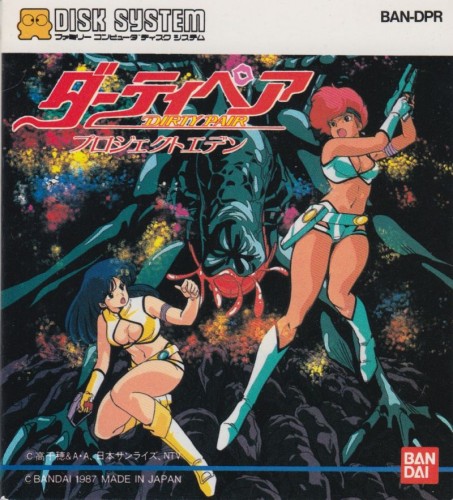