Get ready for a new role-playing adventure as Mario returns to paper form to stop a dangerous threat. In Paper Mario 2, Mario can dodge, inflict damage, and impress the crowd to strengthen his attacks. Also, Mario and his friends have more paper abilities. They can now turn sideways to slip through cracks, fold into a paper airplane to fly, roll into a tube, and more. They can also use a variety of items like hammers and thunderbolts to defeat their enemies.

The Thousand-Year Door borrows many gameplay elements from its predecessor, the Nintendo 64 game Paper Mario. These elements include a turn-based battle system with an emphasis on action as well as a paper-themed universe. For the majority of the game the player controls Mario, although Bowser and Princess Peach are playable at certain points. The plot follows Mario's quest as he tries to retrieve the seven Crystal Stars and rescue Peach from the X-Nauts. 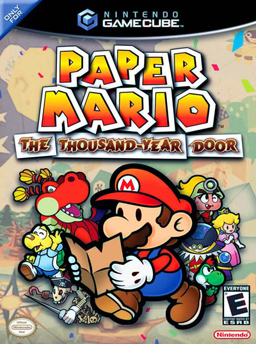