Zombie Panic in Wonderland is a third person shooter, similar to Sin And Punishment. The player aims the crosshair and shoots using the wiimote, while moving the character left and right with the Nunchuk. It is possible to choose between three different characters; levels consists of three parts with a boss fight at the end. All buildings in the background are destructible, which contributes to the high score.

The story revolves around a self-centered prince who has accidentally created a magical perfume that turns anybody who smells it into a zombie. Enemy characters hail from all kinds or popular fairy tale stories, such as Snow White, Alice in Wonderland, The Wizard of Oz and Little Red Riding Hood. 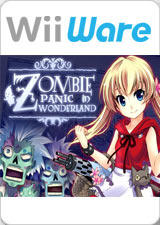