From the control panel of the last combat tank on Earth, it's up to you to stop the fleet of automated weapons that is ravaging the countryside. Armed with a radar screen and turret gun, you must search out and destroy these relentless automatons before they destroy your tank.

Commonly considered the earliest progenitor of first-person shooters (FPS), Battlezone is a 3D tank game initially released in the arcades, and later converted officially to many systems. 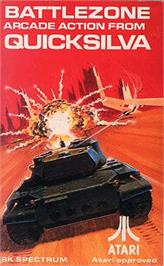