The player controls a bug exterminator referred to as only the "Fumigator" in the manual, and the objective is to spray worms and spiders that try to eat the flowers in a greenhouse. The worms crawl along vines on the top screen, while the spiders crawl along webs on the bottom screen, and the player will have to try to hit them with a bug spray before they reach the flowers. A ladder connects the two parts of the game (which otherwise offer almost identical action). The player receives a point for killing a worm far from a flower, two points for a worm one step away from a flower, and three points for a worm closest to a flower. To kill the spiders, however, the player needs to spray them closest to a flower. If sprayed farther away, the spiders back away one step, which gives the player a point. When the player kills a spider, they earn three points. As the game progresses, the worms and spiders will move faster. If a worm or spider reaches a flower, the flower will die, earning the player a miss. If the player gets 300 points without any misses, all points will be worth double until the player does get a miss. If the player has any misses at said score, all misses will be canceled instead. When the player gets three misses, they receive a Game Over. 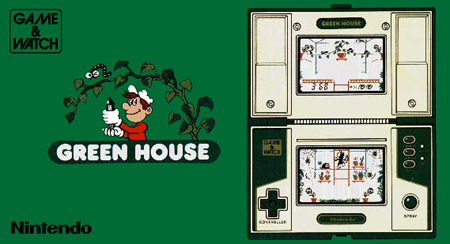