Arctic is an action puzzle game that describes itself as "active rail playing". Each of more than two-dozen stages consists of a set of rails in various arrangements, often looping around each other and splitting in various directions. Each stage contains a number of colored balls which begin in corresponding slots, and after launching them the goal is to return the balls to the matching-colored slots.

The only interaction the player has with the board is switching two sets of splits; there are yellow and blue splits, which will redirect any balls moving through them, and the player can only turn all of one color as a group. Many stages also contain bumpers and gates which will affect the speed and direction of the balls. Completing a puzzle often requires strategic use of the stage's features to bounce balls onto the correct paths. 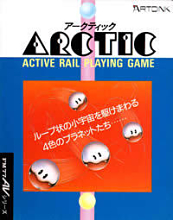