Board game with card battle elements based on Konami's popular Goemon characters and locations. The third Goemon game for Nintendo 64 after the 3D adventure Mystical Ninja Starring Goemon and the 2D platform romp Goemon's Great Adventure, Sugoroku takes the popular Japanese board game and populates it with Konami's crazy cast of "jidaigeki" characters. Up to four players cast the two dice and move Ebisumaru, Sasuke, Yae and Goemon over prerendered boards based on all the previous games in the series. The objective is to collect "Ofuda" cards and beat the opponents to the punch. The game features a total of 340 different graphical cards. Released in Japan only, the title omits the "Ganbare" in the title. 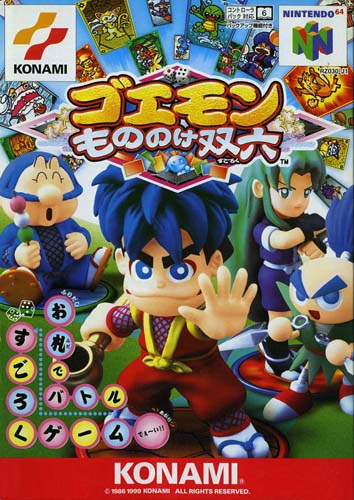