Doraemon: Nobita to Mittsu no Seireiseki

Based on the anime series of the same name, this is a 3D action game similar to Super Mario 64. Three sacred crystals were broken into pieces and scattered across the world. Controlling Doraemon, a robotic cat-like creature who can enter fantasy world through his dreams, and his three friends, you must retrieve the crystal pieces and prevent a powerful demon from conquering the world. You can switch between the five playable characters (Doraemon himself, Jaian the karaoke bully, Suneo the boxer, Shizuka, a girl who can jump very high, and Nobita the pea-shooter), each one of which has his/her own fighting style and abilities. Doraemon can upgrade himself by collecting various tools that will allow him to breath underwater, to fly, or to ride a winger dragon. 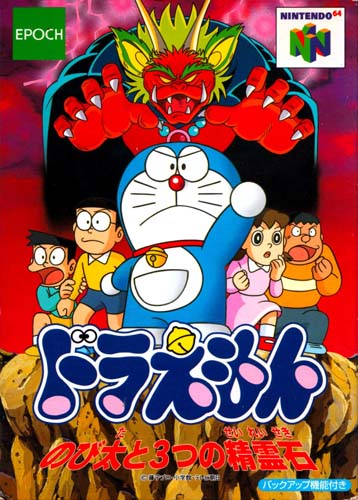