To commemorate the 30th anniversary of the company, Koei produced a spin off for one of their hit dating game series Harukanaru toki no Naka de: Yume no ukihashi.

The game combines all date-able characters from the first three installments for an epic romantic adventure. Wake up as one of the priestesses to realize that you are located in the heavenly realm and that all the Hachiyou, except the two who are closest to you, are imprisoned by the heavenly warriors. Escape from their wrath under their protection and seek ways to free your other members.

You can choose any of the two guardians out of twenty four, create scenarios that cross boundaries of the three installments. Combine forces with the other two priestesses to defeat your enemies and beat the game with different Hachiyou combinations. With so many playable characters, this is an ultimate romantic adventure that deserves to be played again and again 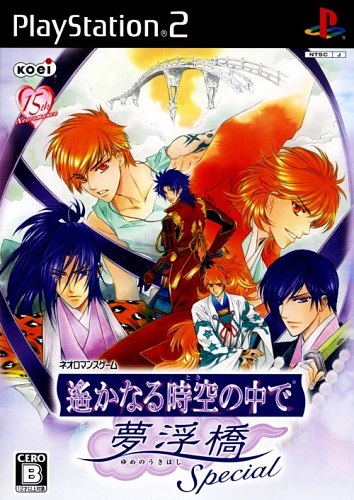