The cast of One Piece comes together to participate in a treasure hunt. With decent anime cut-scenes, speech, and cel-shading in the game, From TV Animation: One Piece Treasure Battle creates an excellent feeling of being immersed in the One Piece universe. Or at least, is an entertaining game to fans of the series.

From TV Animation: One Piece Treasure Battle is divided into several game modes, along with plenty of extra bonus material. Like a traditional party game such as Super Smash Brothers Melee, you can unlock new characters and stages through frequent play sessions. If a player wins a game round, you get a card (based from the One Piece trading card game), and collecting/matching these cards are the key to unlocking secrets in the game. 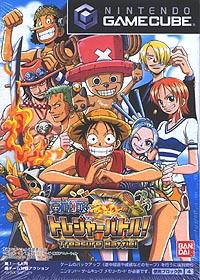