Shortly after Alice returned from the miraculous trip through the Looking-Glass, her house was burnt down, and her parents died in the fire. Alice was the only survivor of the terrible accident. After repeated attempts at suicide, she gets locked up inside a mental institution and is slowly wasting away there before she is summoned to Wonderland again by the White Rabbit. But this time it's a Wonderland gone seriously bad and gory. The only chance for Alice to restore her peace of mind and find out more about the death of her parents is to fight through Wonderland and free it from the evil powers.

American McGee's Alice is a direct sequel to Lewis Carroll's book Through the Looking-Glass, itself a sequel to Alice's Adventures in Wonderland. The player controls Alice as she tries to find her way and eventually escape from the demented surroundings of her own fantasy world that she's been thrust into. The surreal environments utilize themes from Lewis Carroll's original books, applying a noticeably darker and more violent edge to them.

The gameplay is third-person action with platforming, shooting, and light puzzle-solving elements. Alice starts with a knife, which can be used as a melee weapon or thrown at enemies. Later she acquires other weapons, such as a staff that shoots bolts of energy, dice that emit deadly gas, a time-stopping watch, and others. Weapons have an alternate fire mode, which usually inflicts more damage but depletes Alice's magical energy. The latter, along with Alice's health, can be restored by collecting the essence of defeated foes.

The game also features platforming sequences, during which Alice has to jump over gaps, avoid obstacles, or climb in order to reach her goal. Puzzle-solving usually involves manipulating the environment rather than using inventory items. 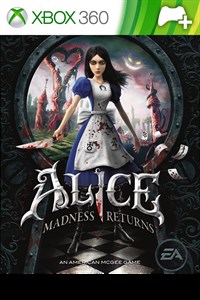