The year is 6236 and Fantasyland is under attack once again! Leap back into the role of ‘Harrier’, our jumpsuited hero, then soar across twelve unique lands, crammed with fast-paced action and swarms of enemies. Often cited as the forerunner to the modern third-person shooter, you can now experience the birth of a genre from the comfort of your own mobile device! 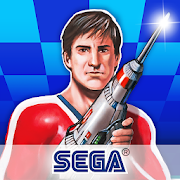