The Return of Ishtar

The sequel to Namco's own The Tower of Druaga. It's been a while since Gilgamesh, the Golden Knight, went to the tower to defeat the demon Druaga with the help of the goddess Ishtar. But when the magic that contained the evil in the tower weakened, many monsters escaped and it's up to Gil to retrieve the magical Crystal Rod and return peace to the lands. Two players join forces and fight side-by-side, one as Gilgamesh, the other as the Lady Ki. The sequel features graphical upgrades over its predecessor and sports more than twice as many stages: 128 floors. 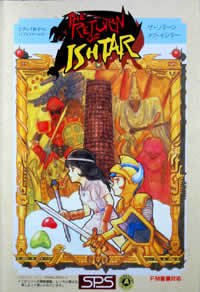