The simple little country girl Papri has a problem: her boyfriend Minto seems to show signs of interest towards another little girl, Cocco. Papri has to win his love back! The only way she can achieve that is by collecting flower bouquets, presenting them to Minto as a token of her feelings and gradually making him forget the other girl.

Girl's Garden is Yuji Naka's debut and an early precursor of games with dating gameplay mechanics. Papri has to move through a confined top-down area, collecting flowers on the way. After having collected ten flowers, Papri can enter her boyfriend's house, completing a round and advancing to the next one, with the same goal but increased difficulty. Flowers must be picked up at full blossom; catching them too early will have no effect, while collecting wilted flowers will make Papri lose half of her bouquet.

Papri's health is called "love" in the game, and is represented by hearts. She loses a heart if she falls into water or if a bear comes too close to her. Bears are roaming the area and can be temporarily distracted by dropping honey pots on the ground. Bees act as allies and will supply Papri with honey and bonus items that increase the score. 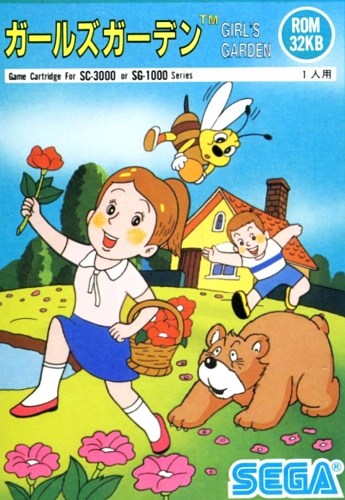