F-Zero Grand Prix is a remake of the SNES launch title F-Zero that was made specifically for Satellaview in Japan.

The game features a system that allowed players to upload their score so others around the world could view it in a scoreboard, there was no multiplayer.

There were four versions of the game released, each with a different league including Knight, Queen, King, and Ace. The vehicles in the game were unique to it. They included Blue Thunder, Luna Bomber, Green Amazone, and Fire Scorpion. The drivers of each vehicle are unknown, and are not fan favorites such as Captain Falcon and Samurai Goroh. The game featured the original 15 courses from F-Zero, as well as extras that share the environments from the previously made tracks. 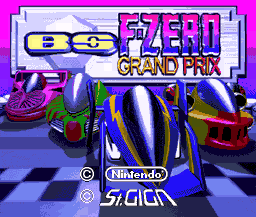