Solid Runner is a mech-based sci-fi RPG for the Super Famicom released late in the system's lifespan. It was the second RPG that Sting Entertainment developed, after Treasure Hunter G.

The player, as Shuu, splits their time between investigating the deaths of Shuu's fiancee and her politician father and taking to the streets in his customized mech to fight criminal gangs and other culprits. He is accompanied by his partner Ion and a robotic assistant who keeps him updated on the case.

The turn-based combat maps the mech's four weapons to the four face buttons, with the player selecting the best weapon for any given situation. Ranged weapons needs reloading eventually, which takes a turn, and the player can also choose to make evasive maneuvers while firing which reduces their accuracy but also reduces the chance of being hit in retaliation. 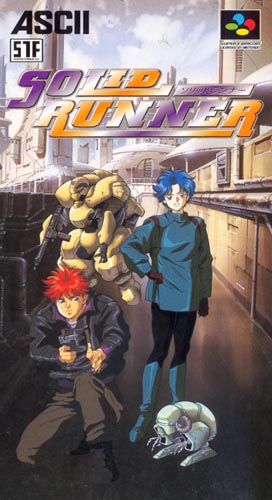