Cosmo Gang: The Video is a single-screen shoot 'em up that greatly resembles Galaga with its gameplay, with enemies swooping in and ship upgrades that can be earned by shooting down the UFO enemy at the top of the screen.

The Cosmo Gang are based on a series of characters that had previously been used by Namco for a redemption game the previous year. The subtitle suggests that this is their video game debut. Originally released in the Arcades, Cosmo Gang: The Video was later ported to the Super Famicom. It was followed up the subsequent year with Cosmo Gang: The Puzzle, a Puyo-Puyo style puzzle game that was the basis for Namco's later Pac-Attack. 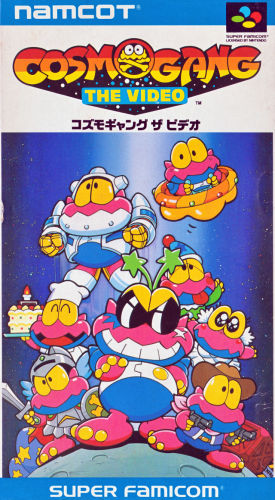