Kishin Douji Zenki: Denei Live is an action/platformer game from Now Production and Hudson Soft. It is the second of three games based on the license to be released for the Super Famicom.

The game is unusual as it splits its time between two modes that are distinct both tonally and mechanically. The "mature" Zenki, in his most powerful form, fights various demon minions of Kurama in tactical one-on-one battles that use a real-time progress bar that needs to be filled at least partially before an attack can be launched. This mode is similar to the gameplay used in other anime license action games, such as YuYu Hakusho and YuYu Hakusho Tokubetsu Hen. The other mode is a more cartoonish platformer featuring Chiaki as she attempts to assist Zenki by completing various objectives. Chiaki resorts to her magic to protect herself. 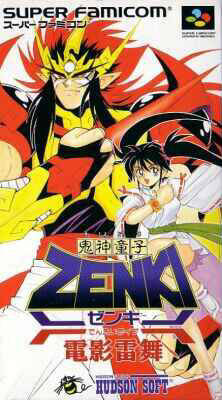