Real Soccer 2010 is the fifth 3D game in the Real Football series and the second one for the iPhone and similar touch screen devices. This is also the first release in the series where touch screen controls are used on all platforms (although the DSi retains its combination of stylus and buttons controls from last season). The game hence plays similar to the iPhone version of Real Soccer 2009 and like it uses the same virtual d-pad and two on-screen buttons for controls.

The game carries a FIFPro licence which means that it features real life players but it does not have any real team or competition names. The game contains the common game modes from previous versions like friendlies, cups and leagues as well as the online RF League. Two new game modes have been added: Enter the Legend and Club Master. The Enter the Legend involves playing a league season as a single player while Club Master is a simplified management mode where it is possible to buy and sell players in addition to playing the matches. There is also an editor which can be used to team line-ups and swap player between teams. The DSi version differs in that it does not include the new modes and it does not have licensed player names. 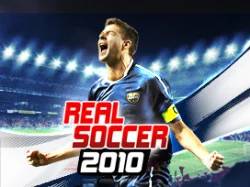